This is not THE Middle East peace deal that has beguiled a generation of American presidents, the one President Donald Trump commissioned his son-in-law and special advisor Jared Kushner to conclude.

At its most optimistic read, the agreement announced Thursday by Trump between Israel and the United Arab Emirates to normalize relations between their two states is a poor man's facsimile for the, as yet, unachieved grand bargain between Israelis and Palestinians to quell their decades of conflict.
Yes, it is historic, but it is only an illusion of the peace President Trump vowed he'd deliver.
Back in January this year Trump announced the contours of what he called his Vision for Peace -- officially known as Peace for Prosperity. Palestinians boycotted it denouncing it as money for land, in their view giving up territory in return for promises of improved business prospects, while Israel threatened to take the land regardless.
In recent years, Trump had raised expectations of a breakthrough Palestinian-Israeli deal, and with it, the prospect of an even more precipitous fall if it failed.
The new agreement is implicit recognition that Trump's original peace plan is dead, yet it revives Israeli Prime Minister Benjamin Netanyahu's political fortunes.
Netanyahu gets what he wants, decades of Arab intransigence to a deal on Israel's terms is crumbling, at little or no cost.
The Israeli PM's impulse to annex swaths of Israeli occupied West Bank land could have been the match to ignite tinder dry tensions, torching Palestinian aspirations for their own viable state. For now, the UAE appears to have dampened that prospect.
The joint statement states "As a result of this diplomatic breakthrough and at the request of President Trump with the support of the United Arab Emirates, Israel will suspend declaring sovereignty over areas outlined in the President's Vision for Peace and focus its efforts now on expanding ties with other countries in the Arab and Muslim world."
Anwar Gargash, the UAE's erudite Minister of State for Foreign Affairs defines the agreement's success, in part, as "Israel's commitment to stop the annexation of Palestinian lands, which will preserve the two-state solution." 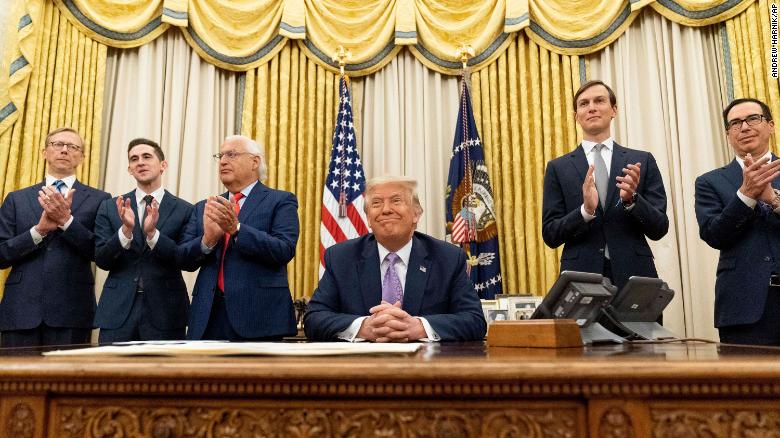 President Donald Trump, accompanied by from left, US special envoy for Iran Brian Hook, Assistant to the President Avraham Berkowitz, US Ambassador to Israel David Friedman, White House senior adviser Jared Kushner, and Treasury Secretary Steven Mnuchin, in the Oval Office on August 12.
At first read, the agreement sounds rock-solid, but kick the tires and the threat of escalation has only been moved down the road a little. The clue is in the word "suspend."
The architect of the agreement, Kushner, described it thus, "I believe they [Israel] will not take action to move forward unless we have an understanding between America and Israel that it's the right action at the right time."
When asked when that might be his reply could as well have been, how long is a piece of string? Saying, "Somewhere between a long time and a short time, that's what temporary means."
Netanyahu has no doubts, temporary means temporary.
"We received a request to wait temporarily from President Trump. It is a temporary postponement. It is not removed from the table, I am telling you that," he said. He is also a skilled political operator playing to a domestic audience, annexation is less an immediate goal, more a manipulation to turn negotiations in his favor.
Gargash appears to hint that the UAE is playing for time, possibly calculating if temporary runs to the November US elections, "we think there is a never a right time, never a right moment, but at the same time if we really get this commitment it will be like diffusing a time bomb on the two state solution." 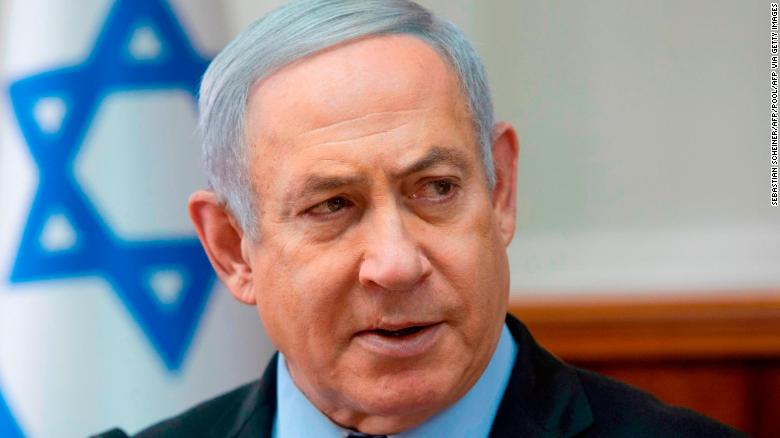 Israeli Prime Minister Benjamin Netanyahu has no doubts that temporary means temporary.
So the timing works for the UAE -- kind of -- but why now for the others?
Both Trump and maybe Netanyahu face elections and need votes. And both are running out of time to cement a legacy, to shore up their otherwise relatively controversial records in office. Netanyahu has a corruption trial hanging over his head, Trump's legal troubles are likely coming too.
In the deal Trump, and the UAE, have handed Netanyahu the means to bury his misdemeanors under a veneer of success opening the lucrative Arab market to Israel's high tech and security.
Look no further than the second paragraph of the joint statement for the mutual back slapping and clues to the hyping of the event, "This historic diplomatic breakthrough will advance peace in the Middle East region and is a testament to the bold diplomacy and vision of the three leaders and the courage of the United Arab Emirates and Israel to chart a new path that will unlock the great potential in the region."
It was only yesterday one of Trump's National Security advisors, Robert O'Brien, opined Trump deserved a Nobel Peace Prize.
Well why not, his predecessor Barack Obama got one and this is one piece of Obama's legacy that Trump hasn't been able to deconstruct -- the next best thing is to get one himself.
And what about the OTHER party whom if they were at the table could make this a truly historic moment of profound regional significance, the Palestinians.
In short, they feel sold out, again. Palestinian Authority President Mahmoud Abbas labeling the deal "an aggression on the Palestinian people" and "a betrayal of Jerusalem."
His hard-line Palestinian rivals Hamas are equally dismissive, saying: "We strongly condemn, in all possible ways, normalization with Israel, which is considered a stab in the back to the Palestinian cause".
The reality though, even while Gargash says they've kept alive the possibility of a Palestinian state that would have been extinguished had Netanyahu followed through on his threat to annex chunks of the West Bank, the Emirates has re-bolded the writing on the Arab wall. Palestinians don't conjure the regional support they once did and that means the Gulf states -- who help bank roll the Palestinians -- are running out of patience.
This deal reaffirms a Gulf view that Palestinian leaders are perceived as the problem, or rather their failure to clean corruption, and negotiate is the problem, albeit their counterpart for talks for the past decade, Netanyahu is not a palatable negotiating partner. Even when they play by the rules, the perception in Palestinian homes is that the deck is always stacked against them, precisely what this agreement amply reinforces.
Progressively weakened by division and radicalism, the Palestinians' standing is shakier than it used to be. So when they cry foul they may be right, the UAE has kicked them in the shins.
What remains to be seen, is whether it's a "pay attention" kick, as in wake up and smell the coffee, or if it is designed to fell this generation of Palestinian leaders.
Gargash isn't talking about turning off the money tap, but he is hinting at it.
"We are committed to seeing an independent Palestinian state with Jerusalem as the capital of that, that is our political commitment. But on the other hand, I think we as part of our world we have been a big supporter historically of the Palestinians politically financially and otherwise," he said.
So is it a good deal?
Gargash's "time bomb" was ticking on them too. Witness the near calamitous backlash to Trump's killing of Iran's top general Qasem Soleimani in January this year.
The stakes in the region are high, Iraq is less than stable, there is a war in Syria, Lebanon is in political freefall, Yemen's war grinds on and infused in all of it an Iranian foreign policy that seeks to scuttle stability and push already sky-high tensions with the US further towards crisis.
If all that weren't enough to encourage the UAE towards compromise on what is a monumental step for them, then the threat of economic carnage in the wake of the coronavirus pandemic ratcheting regional fragility to even greater heights certainly is.
For Trump, who lives by short-term political sells, the agreement is still only intent, nothing but hot political air until the signing in three weeks.
The test will be traction on the promise of bilateral deals to be signed on "investment, tourism, direct flights, security, telecommunications, technology, energy, healthcare, culture, the environment" turning in to tangible results.
Netanyahu has fewer worries now, the hitherto immovable object of Arab opposition to Israel's terms has shifted, and Trump says more Arab states will come on board.
Even if you are Palestinian, the agreement is better than drowning, but only marginally.
And how long can all sides keep treading water? That could depend on the American electorate and a president with the acumen, energy and passion to make a real difference, and if that's lacking, then treading water will work out just fine for Netanyahu.
Does anyone come out ahead?
The UAE has certainly diplomatically upstaged its bigger regional partner Saudi Arabia. And has gained some, albeit temporary, leverage over regional security, while maintaining some independence of Trump's hawkish policies on Iran.
And whatever opprobrium the UAE gets from Palestinians the Arab street isn't in firmament so costs on that are low.
Ultimately the deal is only as strong as the benefits all parties get, and yet again with Trump in office, Netanyahu appears to have bagged the lion's share of those.