Australia secures deal for potential Covid-19 vaccine, will provide it free to all citizens

Australia has secured a deal with the drugmaker AstraZeneca to supply a potential Covid-19 vaccine to its entire population free of charge, the government announced Tuesday, becoming the latest country to lock in supplies of the drug should trials succeed.

British-based AstraZeneca is developing the vaccine in partnership with Oxford University, with advanced trials now underway with thousands of volunteers across multiple countries.
Under the deal, the Australian government would manufacture the vaccine and offer free doses to all citizens.
"The Oxford vaccine is one of the most advanced and promising in the world, and under this deal we have secured early access for every Australian," said Prime Minister Scott Morrison in a statement released late Tuesday local time. "If this vaccine proves successful we will manufacture and supply vaccines straight away under our own steam and make it free for 25 million Australians." 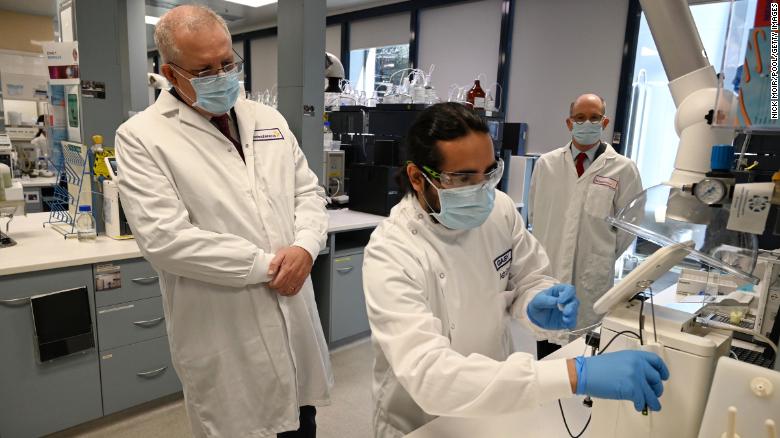 Australian Prime Minister Scott Morrison tours the AstraZeneca laboratories in Sydney, Australia, on August 19, 2020.
"However there is no guarantee that this, or any other, vaccine will be successful, which is why we are continuing our discussions with many parties around the world while backing our own researchers at the same time to find a vaccine," he added.
Speaking on Wednesday, Morrison acknowledged that there were "big hurdles" in producing a successful vaccine but said the AstraZeneca-Oxford University project is "one of the best prospects in the world today."
The deal is still in early stages, with both parties having signed a Letter of Intent. A final formal agreement at a later stage will lay out more concrete details like pricing and distribution. However, the Australian government has previously indicated that it will spend billions of dollars on its vaccine strategy.

AstraZeneca released early results of its closely watched Phase 1/2 trial in late July, which suggested that its vaccine candidate was safe and induces an immune response.
The Phase 2/3 trials will now aim to prove whether the vaccine protects people against the novel coronavirus. Results are expected later this year, and will depend on the rate of infection within the trial communities, AstraZeneca said.
The company has already reached agreements with several governments and organizations to produce at least 3 billion doses of the vaccine, with the first deliveries starting as early as September, it said on its website.
The United States has made a deal with AstraZeneca for 300 million doses, delivering as early as October. Other countries that have also made deals for a potential supply include Russia, South Korea, Japan, China and Brazil, the company said. AstraZeneca has also struck a deal with the European Commission to provide up to 400 million doses for all member states of the European Union.
"With production in our European supply chain soon to be started, we hope to make the vaccine available widely and rapidly, with the first doses to be delivered by the end of 2020," said company CEO Pascal Soriot in a statement last week on the EU deal.

The AstraZeneca deal comes as Australia continues to grapple with its coronavirus outbreak, centered in the state of Victoria -- though other states, including neighboring New South Wales, are also reporting new surges.
Victorian authorities declared a "state of disaster" on August 2, and placed the state capital, Melbourne, back under soft lockdown. These reimposed restrictions include a six-week curfew, a return to online schooling, and rules on how far residents can travel outside their homes (5 kilometers, or 3.1 miles).
The state reported 222 new infections and 17 deaths on Tuesday, bringing its number of active cases to 7,274.
An official inquiry found that almost all active cases in Victoria can be traced back to hotels used to quarantine international arrivals for a mandatory 14 days. The inquiry was launched after claims that some contracted workers were breaking protocol at these hotels -- including reportedly having sex with people under lockdown.
Almost 99% of Victoria's second-wave cases can be traced back to just two quarantine hotels in Melbourne, said Department of Health and Human Services epidemiologist Charles Alpren at the inquiry on Tuesday. The vast majority, upwards of 90%, likely came from just one of those hotels, he said.
It began with one family that arrived from overseas on May 9; each family member tested positive in the days after arrival. Weeks later, three members of hotel staff tested positive; a month later, 17 more people connected to the hotel tested positive. By July 29, health officials had identified 817 active cases linked to the hotel.
All Australian states and territories are now closed off from each other, with hard border closures that leaders warn will stay in place for months to come.