Belarus' embattled President Alexander Lukashenko has declared that the country will not have new elections "until you kill me," according to videos posted online by local news outlets.

Lukashenko made the comments while visiting a Minsk factory Monday, where he was booed and a group of workers chanted "Leave!" in unison. It's yet another sign that the strongman's traditional support base is crumbling after he claimed victory in disputed elections earlier this month.
"You talk about dishonest elections and want to hold new elections," Lukashenko told the crowd. "My response to this — we held the elections and until you kill me, there won't be any new elections."
In response to his remarks the crowd chanted: "Yes, yes without you."
The embattled strongman, who has has been in power for 26 years, is facing renewed waves of pressure from inside and outside the country, after fresh strikes, angry hecklers, international condemnation and a direct challenge to his position left him clinging to power.
Independent observers have criticized the country's August 9 election for not being free or fair. And much of the international community has expressed solidarity with widespread protests, piling pressure on Lukashenko to give in to calls for another vote. At home, the leader lost the support of state broadcasters -- who aired shots of empty studios after staff walked out in protest.
Opposition candidate Svetlana Tikhanovskaya offered Monday to act as the country's "national leader" to help bring peace to Belarus a day after tens of thousands of people poured into the streets of the capital Minsk to demand a new presidential election.
In a video message filmed in front of a blank white wall in Lithuania, where she fled after the vote, Tikhanovskaya said: "I am ready to assume the responsibility and act as a national leader in order for the country to calm down and enter the normal rhythm." She said she would hold a fresh vote and offered support for the swelling demonstrations and industrial action across the country.
She also appealed to the country's security forces to switch sides and turn against the President, promising to "accept" repentant law enforcement officers -- and called on Lukashenko to release political prisoners being held in jails in Belarus.
During the factory visit on Monday, Lukashenko doubled down on his combative response. "You should never expect me to do anything under pressure," he told employees of the MZKT plant, according to state news agency Belta. 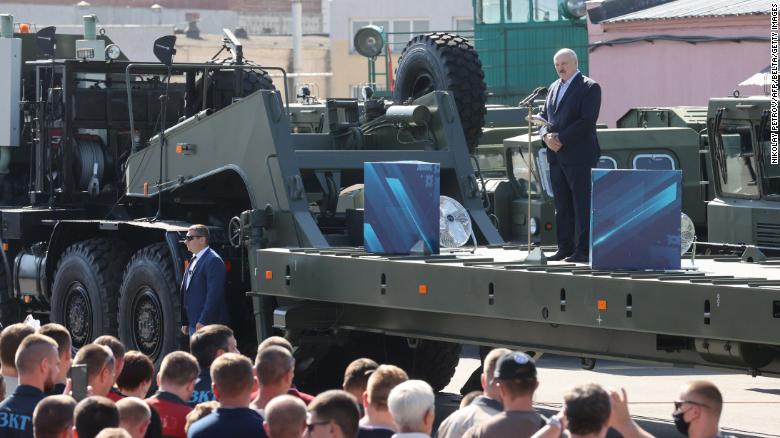 Lukashenko addresses factory employees on Monday.
Further industrial action is planned on Monday after numerous reports of walkouts in recent days.
Lukashenko told the throng of displeased factory workers: "Even if you shoot me tomorrow there are already other people who are going to work."
The President said that he would be willing to share power and to change the constitution but won't do so under pressure from "the streets," in a reference to the mass protests.
"A new constitution is needed," he added. "Two options were offered to me. I rejected them because they are not very different from the current one. Work is underway on a third version. Come, sit down and work on the constitution and I will transfer you the powers according to the constitution. But not under pressure from the streets!"
"Yes, I'm not a saint. You know my toughness. You know that if there was no toughness, there would be no country. You know for sure that I will not offend your children and I will not give up the country to anyone. This is the main thing," Lukashenko said.

As Lukashenko scrambled to regain control, Belarusians tuned into TV networks on Monday morning to see shots of empty desks and re-runs of old programming.
Staff at the country's state TV channels staged a walkout in solidarity with protesters and against media censorship, with some joining protesters outside the national TV and radio broadcasting service Belteleradio, chanting "Truth! Truth! Truth" and waving posters demanding Lukashenko's resignation.
State media in Belarus has long served as one of the main propaganda tools aiding Lukashenko's 26-year grip on power, but that hold appeared to have been shattered on Monday.
The network Belarus 1 aired views of empty anchor desks, while another state channel, ONT, aired a short segment of factory workers chanting "Leave!" to Lukashenko during his Minsk factory visit. Dozens of protesters and staffers also gathered at its entrance.
Ekaterina Vodonosova, an anchor who used to host a culture program on BT channel, part of Belteleradio, told CNN she resigned to protest what she says is the unfair coverage on state media. Vodonosova also said that many of her friends are currently in detention or have been beaten and tortured in the facilities.
"I felt ashamed just thinking that I will have to go back on air and get into a BT branded car knowing that this company was doing this," Vodonosova told CNN.
In previous days, about a dozen prominent state media journalists have resigned, including the head of presidential pool for ONT Dmitry Semchenko. Some did not state the reasons publicly while others cited media censorship as their motive.
Elsewhere at Belaruskalii -- a key potassium mine in the city of Soligorsk, 150 kilometers south of the Belarusian capital -- miners joined nationwide actions by walking out.
Several hundred workers came out to strike outside the company's main building to demand new elections, the release of political prisoners and punishment for law enforcement officers who attacked protesters last week, local outlet TUT.BY reported.

Meanwhile, foreign governments have heaped further scrutiny on the longtime leader, joining calls for a fresh vote and condemning apparent human rights violations in the aftermath of the election.
British Foreign Secretary Dominic Raab said on Monday that the United Kingdom "does not accept the results" of the August 9 ballot, calling it "unfair" and criticizing the "grisly repression that followed."
"The world has watched with horror at the violence used by the Belarusian authorities to suppress the peaceful protests that followed this fraudulent Presidential election," Raab said. 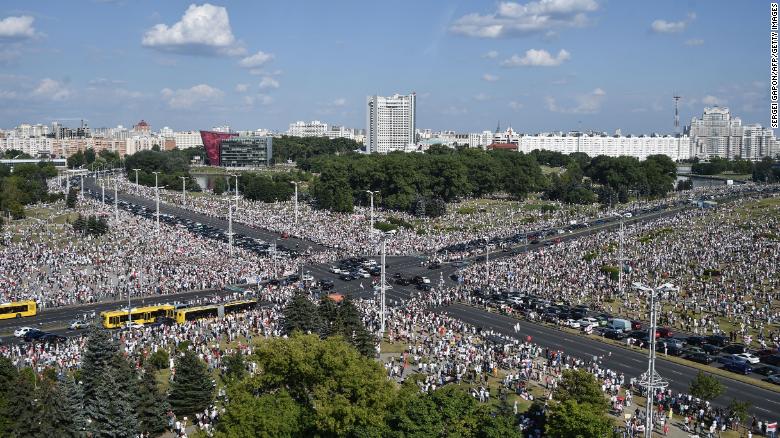 Belarus opposition supporters at a rally in central Minsk on Sunday.
EU leaders will meet via video conference on Wednesday to discuss the situation, European Council President Charles Michel said on Monday. "The people of Belarus have the right to decide on their future and freely elect their leader," Michel said in a tweet. "Violence against protesters is unacceptable and cannot be allowed."
Meanwhile, German Finance Minister and Vice Chancellor Olaf Scholz told Bild newspaper on Monday that Lukashenko is a "bad dictator," adding: "I am firmly convinced that this President no longer has any legitimacy, otherwise he would not act with such incredible, such brutal, violence."
US President Donald Trump briefly weighed in on the situation on Monday.
"That's a terrible situation, Belarus. We'll be following it very closely," he said, when asked to weigh in by a reporter on the south lawn of the White House.
Amid the intensifying public anger, Lukashenko has reached for a lifeline from Vladimir Putin -- reportedly holding two phone calls over the weekend with the Russian President, who is mulling his options in a neighboring state that still falls squarely under Russia's sphere of influence.
But the Kremlin has so far been noncommittal in its response. Belarus is an important buffer nation between Russia and the NATO member states of central Europe.
Although there was no official count, CNN crew in the Belarusian capital Minsk estimated that around 50,000 people attended the opposition protest on Sunday afternoon, making it one of the largest demonstrations in the country in recent memory.
Lukashenko gave a speech to a smaller crowd of government supporters a few streets away, in which he claimed Belarus was being threatened by foreign interference.
"There is a build-up of military power on the western borders of the country. Lithuania, Poland, Ukraine are ordering us to hold new elections. If we listen to them, we will perish," he said.
A spokeswoman for NATO, which counts Lithuania and Poland among its member states, told CNN in a statement that there was no NATO buildup in the region.