﻿Hong Kong: Chinese shoppers are finally starting to snap up high-end handbags, shoes and jewelry again, giving the luxury goods industry hope that a recovery from the coronavirus pandemic is on the way.

But leading brands still face a tough road ahead, and will likely have to rethink the way they do business to withstand a damaging, worldwide hit to sales this year, as well as a shift in shopping habits in many recession-scarred economies.
Several luxury goods companies reported an uptick in China this spring as people emerged from weeks of lockdowns, spurring what some analysts have called a trend of "revenge spending" — the release of pent-up demand once people aren't forced to stay home.
Tiffany (TIF) this week pointed to China as a bright spot for its jewelry business, saying that retail sales surged around 30% in April and 90% in May compared to the same months last year.
This was despite a drop of about 40% in Tiffany's global net sales in May. "Our business performance in mainland China, which was the first market impacted by the virus, is indicative that a robust recovery is underway," CEO Alessandro Bogliolo said during the company's earnings presentation on Tuesday.
Others have echoed similar thoughts. Burberry (BURBY) said last month that sales of its clothing, bags and accessories in China were "already ahead of the prior year, and continuing to show an improving trend."
And Swiss jewelry and watchmaker Richemont has pointed to China as a bright spot in recent weeks, reporting "strong demand" in a results announcement last month since its 462 boutiques in the country opened back up.
"The data indicates that China is in recovery mode," Luca Solca, an analyst at Bernstein, wrote in a note published late last month. Researchers at his firm have created a "rebound index" to track consumer confidence, which indicates that sentiment among Chinese shoppers improved significantly through May.

Because of the recent lift, China could be the one market where luxury retailers see a turnaround this year, according to Claudia D'Arpizio, a partner at consulting firm Bain.
"It's actually been very, very positive," Edgardo Osorio, founder of Italian shoe brand Aquazzura, told CNN Business. "China has always been, but is especially now more than ever, one of the most fast, [responsive] customers."
Chinese customers may be spending more money on goods at home because they aren't able to travel as easily. Two-thirds of sales from Chinese shoppers typically happen outside China, according to analysts.
But much of the world is still dealing with the pandemic, limiting foreign trips and the opportunities people have to spend any excess cash.
"Instead of going on holiday, they might buy a Chanel bag," said Fflur Roberts, head of luxury goods research at Euromonitor, who added that an uptick in spending is also happening in other countries, including South Korea. "We are seeing signs of the market returning to a certain extent." 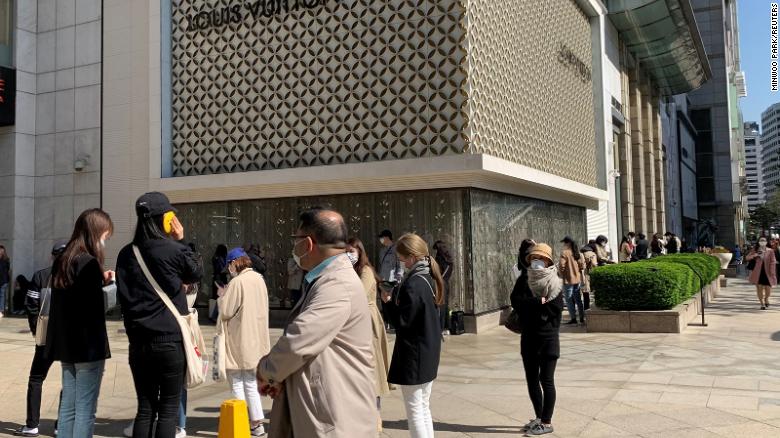 Shoppers lining up to enter a Louis Vuitton boutique in Seoul in May. "South Korea is almost mirroring what's happening in China," said Fflur Roberts, an analyst at Euromonitor.
Some shoppers may also be after "a psychological effect — of coming back to normal life," noted D'Arpizio.
The rebound in China is important because shoppers there are vital to the global luxury market. They account for 35% of all sales worldwide, according to Bain. Five years from now, the consultancy's estimates suggest that could shoot up to nearly 50%.

But the industry's still hurting

But success in China is only part of the story. As customers elsewhere stay home and hold back on luxury shopping in favor of essential purchases or cheaper, unbranded goods, sales of personal luxury items — including handbags, shoes and clothing — are still expected to take a huge hit.
Bain projects that global sales of those items could decline by as much as 35% this year, with expected revenue of 180 billion to 220 billion euros (around $204 billion to $250 billion). That's compared to the estimated 281 billion euros ($319 billion) taken in last year.
Global brands have acknowledged the pressure. Last week, for example, LVMH (LVMHF) disclosed to investors that its board had met to reexamine its pending $16.2 billion acquisition of Tiffany in the light of the pandemic.
"Coronavirus is forcing companies to rethink almost every business model," Roberts said.
A closed Louis Vuitton store in Wuhan in March. Its parent company, LVMH, told investors in April that sales had surged for most of its brands in China as the market there reopened.
The recent jump in sales inside China "is not counterbalancing the loss of sales for luxury brands from Chinese consumers globally," said D'Arpizio. "Overall spending from Chinese is much below last year."
The boost of "revenge spending" isn't expected to last very long, either. "We see this as a sort of temporary effect," added D'Arpizio.
What the industry really needs are tourists, from China or elsewhere, she noted. "We expect traveling to be the last driver to really come back to normality. It will need many months, probably more than one year."

How we shop has changed

To cope with the new reality of catering more heavily to the domestic market, companies will have to adjust their strategy and figure out how to reach more local customers.
China is already giving brands a blueprint. Even before the outbreak, shoppers were spending money closer to home as they avoided hubs such as Hong Kong due to mass protests, and as brands reduced the price gap that had typically made their products cheaper elsewhere.
That pushed companies to open more stores in mainland China, collaborate with local artists and form partnerships with Chinese players. That trend appears to be accelerating.
Burberry, for example, is working with Tencent (TCEHY) on a new online store in China set to launch later this year.
The approach could be applied elsewhere. Burberry CEO Marco Gobbetti last month called the plan a "fundamental testing ground" that could help its teams figure out how to serve customers better in the future.
And as long as travel is restricted, brands may have to tailor offerings in each market, according to analysts.
That's a pivot for businesses, which typically rely on the crisscross of travelers and don't always spend significant time carving out strategies for individual countries.
"This is also a big change for the stores in Europe that were really meant more for tourists — a shop in Paris, or a shop in Milan," said D'Arpizio. Now, "growth will come from the local customers." 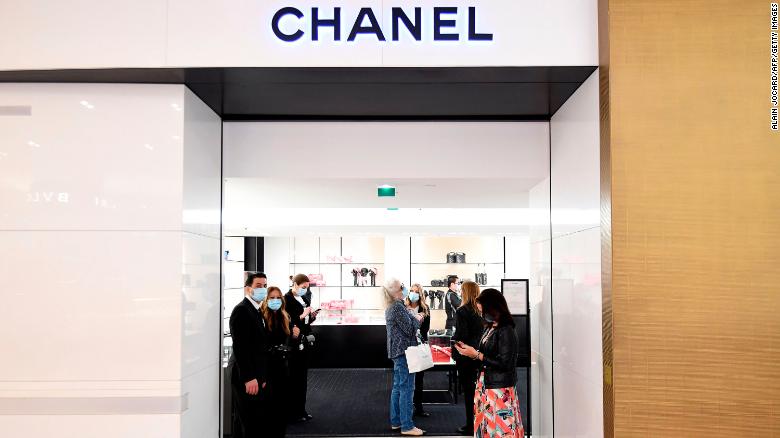 Shop assistants welcoming customers to Chanel at Galeries Lafayette, on the first day of the department store's reopening in Paris in May.

Boutiques are here to stay

Some storied luxury brands that have typically held out on e-commerce are rethinking their strategies, too.
Swiss watchmaker Patek Philippe, for example, recently started selling timepieces online for the first time because of the crisis, according to Roberts, the Euromonitor researcher. The company did not respond to a request for comment.
That suggests a subtle shift, although some brands say the allure of going to a store in person won't go away anytime soon.
"For me, my boutiques, I decorate them like my home," said Osorio, the Aquazzura boss. "You do need a physical presence because you want the final client to show up and understand [the brand]."
Brands also view stores as an opportunity to "gain visibility," according to D'Arpizio. That's why companies will still continue to invest in shops at airports, even if no one can visit them right now, she said. 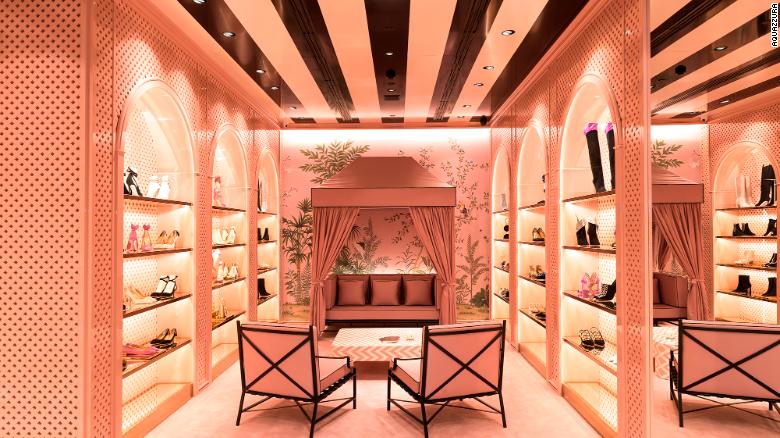