England and Scotland went separate ways on Covid-19. It may lead to a full divorce

When British Prime Minister Boris Johnson landed on Thursday in Orkney, an archipelago off Scotland's northern coast, he boldly proclaimed that the trip proved his commitment to a united nation.

"The Union is a fantastically strong institution -- it's helped our country through thick and thin," he said. "I think what people really want to do is see our whole country coming back strongly together, and that's what we're going to do."
Together, perhaps, but not with Scotland's leader. For his first trip to Scotland this year, Johnson chose a sparsely populated group of islands hundreds of miles from the seat of Scottish political power in Edinburgh; he did not meet with Scotland's top elected official, First Minister Nicola Sturgeon.
That may be for good reason. Though Scotland has suffered badly from Covid-19, Sturgeon's popularity has surged, largely as she has steered a more cautious approach out of the pandemic than her English counterparts. Support for Sturgeon's ultimate political goal, Scottish independence from England, is also on the up.
Johnson's personal ratings, meanwhile, have taken a hit, as the messaging around reopening south of the Scottish border has been more haphazard. His visit to Scotland was an attempt to regain some political capital north of Hadrian's Wall. 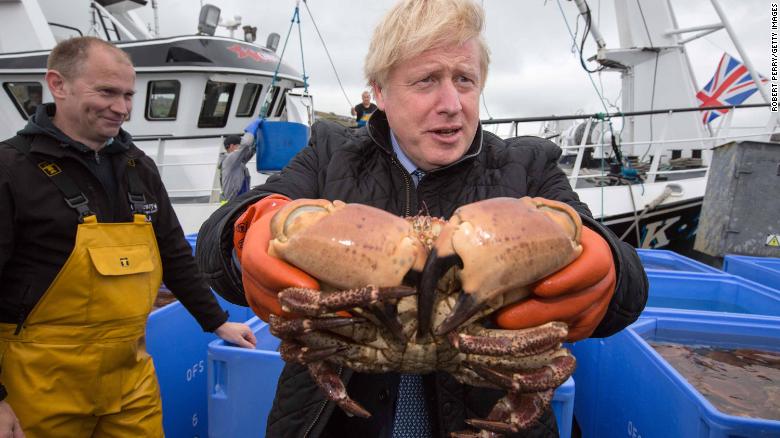 One of the many lessons from the pandemic in the UK has been the starkly different governing styles of the country's political leaders.
Johnson, despite being educated at England's most elite establishments, has made a career of playing the klutzy everyman. It's a routine that works great for photo ops -- the infamous zipline mishap during the 2012 Olympics, as London mayor, was a highlight -- but perhaps not so well for global pandemics.
Long before Johnson himself contracted Covid-19, he told a group of journalists with a mischievous smile that he had recently visited a hospital and "I think there were actually a few coronavirus patients, and I shook hands with everybody, you'll be pleased to know."
Johnson faced particular ridicule for confusing advice about reopening. He told Brits on May 10 that if they could not work from home, they should now be "actively encouraged to go to work" but that they should also "stay alert."
Sturgeon was not impressed. "I don't know what 'stay alert' means," Sturgeon said at the time, adding that she had asked the British government not to deploy that slogan in Scotland.
When Johnson's government introduced new rules that allowed residents to visit certain countries without quarantining on return, Sturgeon called the decision-making process "shambolic." Unlike Downing Street, she refused to allow unrestricted travel from Spain.
Nicola Sturgeon's tartan face mask has become a sartorial statement.
Another area of divergence has been over the issue of face coverings -- Sturgeon made them mandatory in shops here a full two weeks before Downing Street followed suit with a similar ordinance for England. Sturgeon's tartan face mask has become a sartorial signature.
Johnson has not resisted masks with the zeal of US President Donald Trump, but he is more often seen without a face covering, even indoors, than with one. His visit to Orkney drew a small protest; one man heckled, "Where's your mask, Boris?"

To an outsider (and in fact to many Brits), the division of power in the UK can be confusing. Boris Johnson is Prime Minister of the United Kingdom of Great Britain and Northern Ireland, but since the late 1990s, much power has been transferred to the UK's constituent nations -- a process known as devolution.
This means many policy decisions concerning health, education, and transportation for Scotland, Wales and Northern Ireland are taken not in London, but in Edinburgh, Cardiff and Belfast. It has not been unusual to see a grand policy announcement emanating from Downing Street, only to find a postscript explaining that the rule only applies to England.
"This is really the most significant time where devolution has been the most obvious to the ordinary citizens," the pro-independence pollster Mark Diffley said on a typically rainy summer day in Edinburgh. 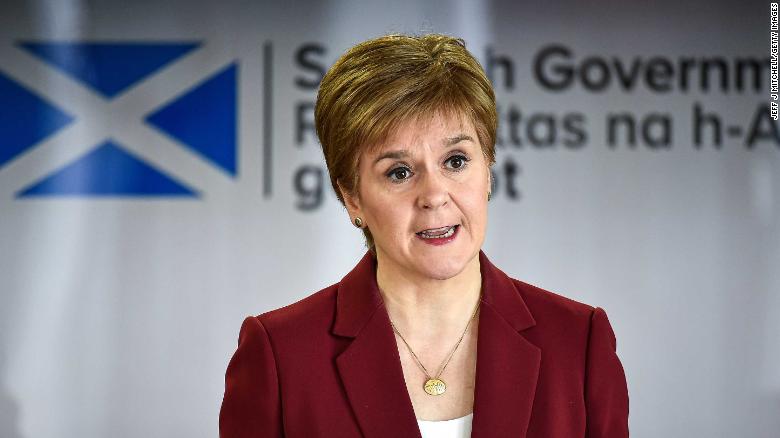 First Minister Nicola Sturgeon gives a coronavirus briefing n Edinburgh.
That perception is evident on the streets of Scotland's capital. "London is too choppy, too changing its mind all the time, can't make out what it wants to do," said Karen Miele, 58, from Edinburgh. "Does it want to help people? Does it want to put the economy first? Or does it just not care? Doesn't know what it's doing."
Andrew MacDonald, 21 from Linlithgow, said that his view of Sturgeon has "definitely gone up" over the course of the pandemic. "I think Nicola has done the right thing in trying to keep the politics out of it, and go with the science first and foremost throughout the whole thing," he said.
Despite this perceived divergence in approach, Covid-19 outcomes -- so far, at least -- have not been so dissimilar. In fact, the death rate in Scotland has only been slightly better than in England. For every 100,000 people, 77 in Scotland have died and had Covid-19 listed on their death certificate, versus 86 in England.
"There are important differences in the approach, and also important differences in the public perception of the approach," said Linda Bauld, professor of public health at the University of Edinburgh.

Photos: British Prime Minister Boris Johnson
Johnson sits next to Prime Minister Theresa May during a Cabinet meeting in November 2016. Johnson was May's foreign secretary for two years before resigning over her handling of Brexit.
Hide Caption
15 of 29

Photos: British Prime Minister Boris Johnson
As foreign secretary. Johnson meets with US House Speaker Paul Ryan in April 2017. Johnson was born in New York City to British parents and once held dual citizenship. But he renounced his US citizenship in 2016.
Hide Caption
16 of 29

Photos: British Prime Minister Boris Johnson
Johnson poses with his dog Dilyn as he leaves a polling station in London in December 2019.
Hide Caption
21 of 29

Photos: British Prime Minister Boris Johnson
Johnson and his partner, Carrie Symonds, react to election results from his study at No. 10 Downing Street.
Hide Caption
23 of 29

Photos: British Prime Minister Boris Johnson
In March 2020, Johnson announced in a video posted to Twitter that he tested positive for the novel coronavirus. "Over the last 24 hours, I have developed mild symptoms and tested positive for coronavirus. I am now self-isolating, but I will continue to lead the government's response via video conference as we fight this virus. Together we will beat this," Johnson said. He was later hospitalized after his symptoms had "worsened," according to his office.
Hide Caption
25 of 29

Photos: British Prime Minister Boris Johnson
US Secretary of State Mike Pompeo sits across from Johnson in the garden of No. 10 Downing Street in July 2020.
Hide Caption
28 of 29

Photos: British Prime Minister Boris Johnson
Johnson holds a crab in Stromness Harbour during a visit to Scotland in July 2020.
Hide Caption
29 of 29 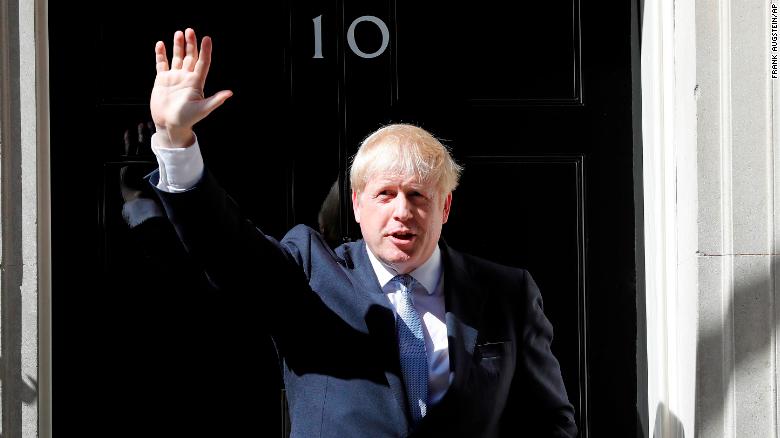 The question for Sturgeon -- and the fear for Johnson -- is whether this positive regard for her stewardship of the pandemic will transfer into political support for the cause of Scottish independence, which remains the bedrock goal of her Scottish National Party.
The last time Scots formally voted on independence, in 2014, "no" won out by more than 10 percentage points. Much has since changed. In the 2015 UK general election, the SNP went from six seats at the House of Commons in Westminster to 56 -- taking all but three Scottish constituencies. Scots voted heavily against Brexit in 2016.
The renowned pollster John Curtice, of the University of Strathclyde, told the BBC on Thursday that support for independence has been surging for about and a year, and is now going up even among those Scots who voted for Brexit.
The latest polling, Diffley said, "would suggest that support for independence is higher than it has been for actually a really, really long time."
That's a problem for Johnson, leader of a party whose full name is the Conservative and Unionist Party. By visiting Scotland, Johnson hoped to underline the benefits to Scots of the 300-year-old union with England -- he was keen to point out that it was the Treasury in London that saved thousands of Scottish jobs with its generous furlough scheme, for example.
But Conservative prime ministers have historically enjoyed little support in Scotland, and Sturgeon joked on Twitter that Johnson's visit didn't do her any harm.
The SNP had promised a new referendum on independence before next year's Scottish parliamentary elections. That's now been put on hold, because of the pandemic. 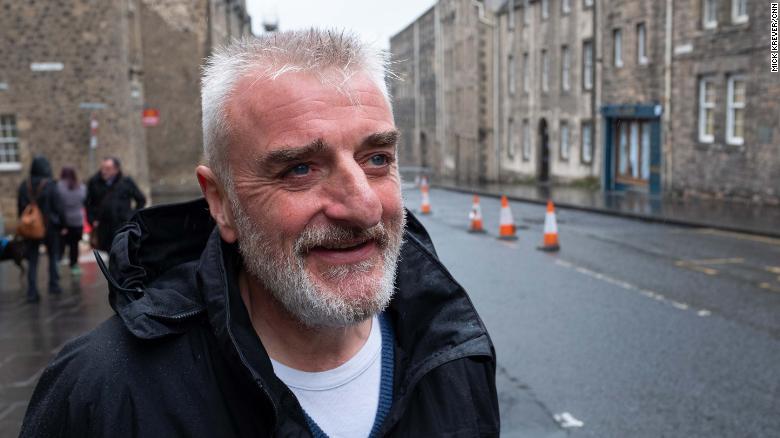 Tommy Sheppard, an SNP MP for Edinburgh East, thinks independence is a "matter of time."
For SNP members of parliament like Tommy Sheppard, who represents Edinburgh East, it is only a matter of time. "Those who wish to see Scotland become an independent country welcome as many trips as possible by Boris Johnson to Scotland, because every time he sets foot in Scotland, support for independence increases," he said.
The pandemic response, he believes, has opened many skeptical Scottish eyes to the real differences between Scotland and England.
"They're aware of that in the way they never were before. And they are perhaps open to the possibility of what an independent Scotland could do if it had the political power to act."
This story has been updated to correct the death rate in England.