I visited this sprawling "reception center" for refugees on the Greek island of Lesbos twice, in 2016 and again in 2019. By my second visit, the situation at the camp seemed to have reached new heights of desperation. Moria had already doubled its intended capacity and continued to grow each day, reaching six times its limit.
On both visits I witnessed the intake of new people of all ages, including the elderly and young children. You would think these people were criminals, not human beings who had fled from war and endless, brutal threat.
Some of them spent months sleeping on makeshift cots with only silver blankets for warmth and comfort.
There was no room. People were packed in, sharing space with complete strangers. Blankets were used as walls to offer some privacy.
The toilets were a disgrace. Running water was often shut off. There was no lighting at night. Women were too scared to leave their tents, afraid to leave their children alone. There was a persistent threat of sexual violence.
The simplest of day-to-day needs were not met. Getting food meant queuing for hours, only to receive the most inadequate meal you can imagine. Some simply chose to stay away, avoid the violence and starve.
Being stuck in limbo, in such appalling living conditions and with no certainty about the future, had an alarming effect on the mental health of people who have been living in Moria; as an advocate for mental health, what I saw on Lesbos resonated deeply. 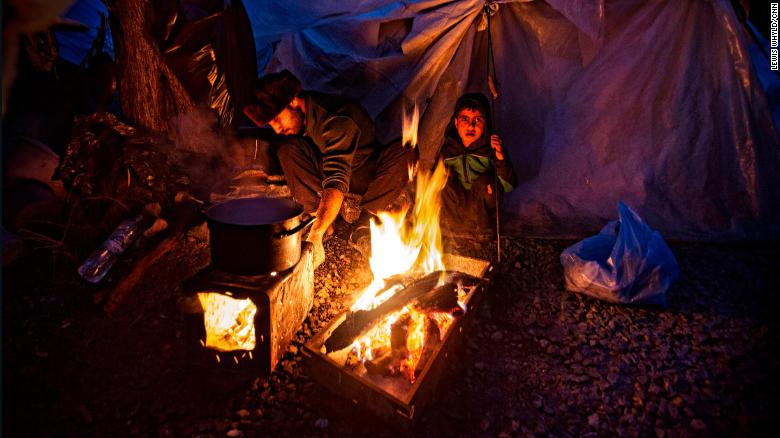 People gather around a fire for warmth in the Moria refugee camp in Lesbos, Greece in February 2020.
A report by the International Rescue Committee (IRC) last year revealed that over 60% of refugees treated at the IRC's mental health center in Moria had considered suicide, with 30% having already attempted it.
Looking into the eyes of someone who has lost all hope is something you can never forget.
You could feel the incendiary nature of that place. Fury and loss and despair -- unprotected, unsupported and uncertain about their futures. Mothers staring into the distance, hope gone, as if they couldn't even see their own children in front of them.
The hell hole that was Moria has now burnt to the ground. But the crisis isn't going away. People continue to arrive every week on the shores of Greece and elsewhere needing protection; people who need shelter, food, love and recognition.
I met some extraordinary people in Moria, who were hugely inspiring. They need some hope. Why is it so difficult for us to offer this? 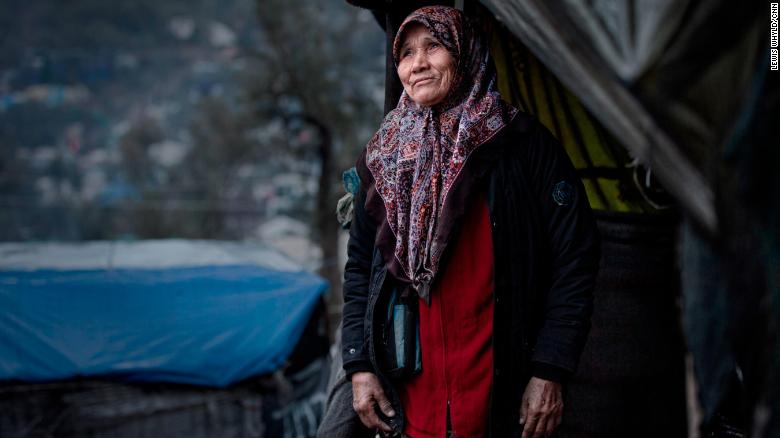 A woman stands outside her tent in the Moria refugee camp in Lesbos, Greece in February 2020.
The fire and the subsequent chaos, the loss of the few possessions these people had, that tiny thread of stability, is utterly heartbreaking; yet maybe, maybe it will move this forward.
This problem needs a sustainable solution. We need to offer education and infrastructure, we need to give the opportunity for people to contribute, to be part of something. There should be sincere, significant efforts to improve services and facilities on the ground for refugees -- and a serious, humane effort to both expand legal pathways into Europe and share responsibility across the continent.
After the fire, both France and Germany said they'd take in more refugees from Lesbos. But one thing is abundantly clear. Greece cannot shoulder this alone. The European Union needs to step up.