Hundreds of demonstrators, some wearing masks, protest against mask-wearing in London

A protester holds up a placard at the London rally on Sunday.

London Hundreds of demonstrators gathered in London on Sunday to protest against the wearing of face masks, days before it becomes mandatory to wear face coverings in stores in England.

A small crowd descended on Hyde Park in central London to voice their opposition to masks after Prime Minister Boris Johnson announced it will become compulsory to wear them in shops from Friday.
Some protesters waved placards referring to masks as "mind control" devices, while others were pictured promoting baseless conspiracy theories including the flat earth theory and a supposed link between 5G and Covid-19. Several demonstrators wore masks to illustrate their opposition to face masks.
The gathering was organized by a group called Keep Britain Free, which claims on its website to support: "Freedom of speech, choice and thought."
A number of studies have found that the coronavirus spreads mainly via airborne transmission and wearing a mask is the most effective way to stop person-to-person spread. 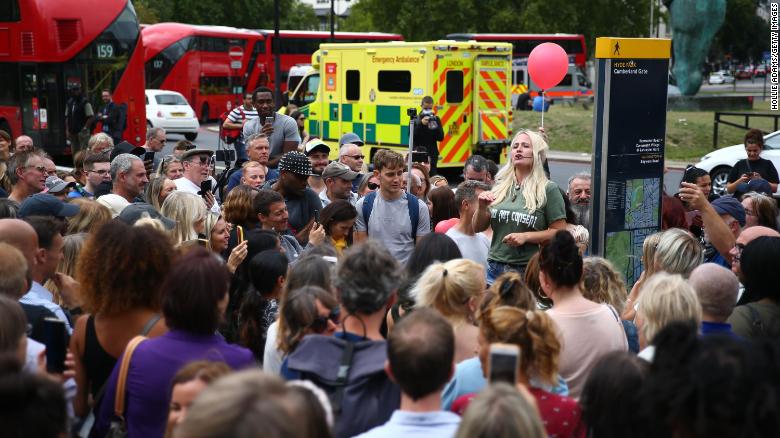 Hundreds attended the rally in Hyde Park.
But despite suffering the deadliest outbreak in Europe, the proportion of people wearing masks outdoors in the UK is lower than it is in other European countries. One study by the Royal Society and the British Academy found that just 25% of Brits wore face masks or coverings in public places in late April, compared to 83.4% in Italy and 63.8% in Spain.
Last week, Johnson said people will be fined up to £100 ($125) if they do not wear masks in shops and supermarkets from July 24.
The Prime Minister was recently seen wearing a mask himself for the first time, after his government spent the first weeks of the pandemic dismissing their effectiveness.
Many countries have already mandated mask-wearing. A fine for refusing to cover one's face in public places came into effect in France on Monday, and similar rules have been in place for weeks in Germany, Spain and elsewhere. Wearing masks was already compulsory on public transport in the UK. 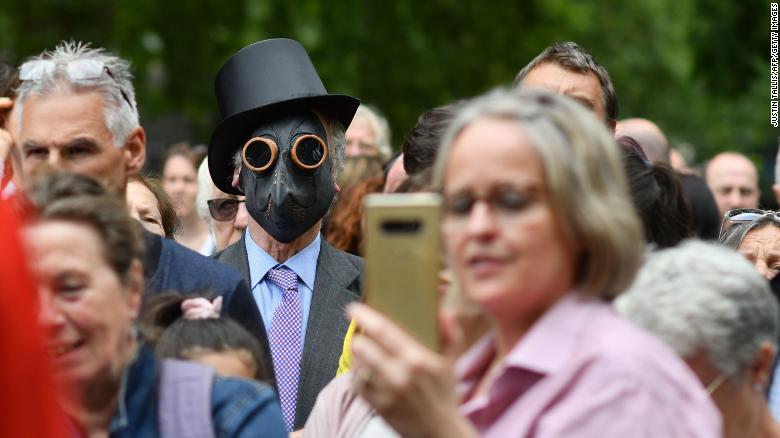 People listen to speakers at the Sunday protest.
The UK has significantly eased its lockdown in recent weeks, with pubs, restaurants and hair salons all re-opening in July.
From August 1, employers can choose whether or not their employees work from home, Johnson announced on Friday.
Indoor live performances can also resume if successful pilots have been carried out, and schools, colleges and nurseries will be open to all students from September, Johnson said.
But while the UK has reduced its number of daily new infections significantly, attempts to re-open society have been hampered by local outbreaks.
Most notably, the city of Leicester returned to lockdown for two weeks from July 2, with non-essential businesses shutting, people advised to minimize social contact, and schools closed for most children, after a spike in cases there.