In political turmoil and economic collapse, Lebanon could now be overwhelmed by Covid-19

A Syrian refugee is checked for Covid-19 during a testing campaign in the southern Lebanese city of Sidon in May 2020.

Coronavirus cases have skyrocketed in Lebanon where the crisis-ridden state is now considering new lockdown measures, raising the specter of a deepening financial crunch.

A combination of high infection rates, a floundering economy and renewed political turmoil could signal a new phase in the country's slew of crises which began after a popular uprising last October.
In addition to a growing financial crisis, healthcare professionals are warning that Lebanon's fragile medical sector could soon be overwhelmed, leaving the country at risk of a rapidly rising death toll from Covid-19.
On Sunday, the tiny eastern Mediterranean country reported more than 1,000 new coronavirus cases, hitting a record for a third consecutive day. Lebanon has recorded a total of 29,987 cases of the virus and 307 deaths from it since the pandemic began, according to Johns Hopkins University.
Around 10% of those testing for the virus are Covid-positive, a figure that health professionals describe as "alarmingly high." The World Health Organization (WHO) recommends that governments maintain a positivity rate of below 5% before moving to relax social distancing measures.

An Italian medic walks around the coronavirus ward of a field hospital on the Lebanese University campus in Hadath on September 8.
"I am extremely worried. On which pathway are we headed?" said Dr. Firass Abiad, manager of Beirut's Rafik Hariri University Hospital, the main public hospital treating patients of the pandemic.
"When we have this sharp rise in the number of cases the first worry of any public health official is whether this rise can overwhelm the healthcare system," he said. "This is the periphery we are moving into."
Caretaker Health Minister Hamad Hassan urged a "total lockdown" on Sunday, but his calls were met with resistance from other members of the cabinet of caretaker Prime Minister Hassan Diab, toppled in the aftermath of the August 4 explosion but still running Lebanon's day-to-day affairs until a new government is formed.
Caretaker Interior Minister Mohammed Fahmy criticized the proposal, arguing that the Lebanese people should not be "toyed" with by repeated lockdowns. Any decision on proposed new restrictions has been deferred to a national coronavirus committee.

Lebanon, which previously recorded some of the world's lowest coronavirus numbers, has seen a rapid spread of the pandemic since Beirut reopened its airport in July.
The spread became rampant after an explosion at the country's main port on August 4 laid waste to several neighborhoods in Beirut, killing nearly 200 people and injuring more than 6,000 others.
When the virus was first detected in the capital in March, a strict and proactive lockdown successfully slowed its spread -- but tipped the country's already teetering economy over the edge, causing its currency to tank and poverty rates to soar.
Left reeling from the economic downturn, many in Lebanon chalked the virus up to a "government conspiracy" and "heresy."
"We don't have coronavirus here in Tripoli. Coronavirus is heresy," Marwan el-Zahed, a native of the northern Lebanese city of Tripoli told a CNN team in May, explaining his belief that politicians had "made it up." 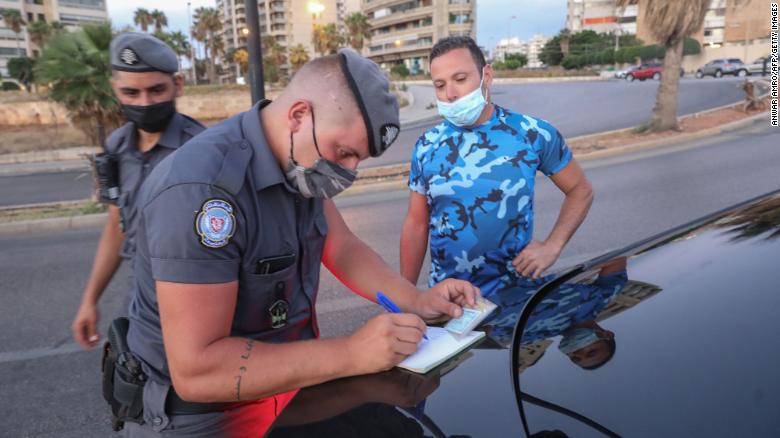 Security forces man a lockdown checkpoint in Beirut on August 21.
The blast that shook Beirut this summer added to feelings of mistrust towards the Lebanese government, prompting many to flout social distancing guidelines.
But as the virus infects more people across the country -- including in Tripoli, which has seen some of the highest case numbers in Lebanon -- many are taking a pause.
"I'll close my shop because that's what we need," said Beirut shop-owner Ali Jaber.
"Better for us to eat za'atar [spice mixture] and oil for lunch than to die in hospital corridors," he said. "We're in the abyss."
Poverty rates in Lebanon have soared to over 50%, according to the World Bank. The country's currency has lost over 70% of its value and people's life savings are locked up in banks that have imposed discretionary capital controls since late 2019.
The political crisis has intensified in recent days, as talks over the formation of a new government have stalled. French President Emmanuel Macron has been brokering the negotiations, in a desperate attempt to stave off full-scale state collapse, in the wake of the August explosion.
Describing the country's political stalemate at a press conference on Monday, Lebanese President Michel Aoun warned that the country may "go to hell." 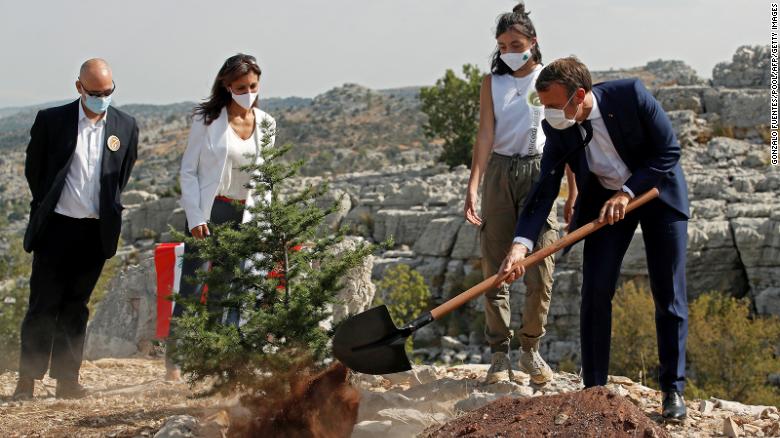 French President Emmanuel Macron plants a cedar tree in Jaj Cedars Reserve Forest, to mark Lebanon's centenary on September 1.
But healthcare workers are urging the government to focus on boosting the healthcare sector, despite the maelstrom of other crises it faces.
"It would be a disaster if hospitals and the ministry of health do not impose rules for all hospitals to accept coronavirus patients and to increase their beds," said Aline Zakhem, assistant professor of clinical medicine and an infectious diseases specialist at the American University of Beirut's Medical Center.
"Many people are going to die because they don't have access to healthcare," she said. "There's going to be whole floors, if not whole hospitals dedicated to Covid."
Meanwhile, the shelves of shops, previously flush with goods, are emptying out, and shopowners are bracing for more uncertainty in the weeks to come.
"I've never seen days like this in my life," said coffee shop owner Mohammad Saab. "My customers aren't showing up anymore. Are they scared of coronavirus? It's all so strange."

CNN's Ghazi Balkiz in Beirut contributed to this report.