North Korean leader Kim Jong Un said he believes his country will no longer need to fight wars because its nuclear arsenal guarantees its safety, according to North Korean state media.

"With our reliable and effective self-defensive nuclear deterrent, there will be no more war on this earth, and our country's safety and future will be secured forever," Kim said in a speech, North Korea's Korean Central News Agency (KCNA) reported Tuesday.
Speaking to a group of veterans on the 67th anniversary of the armistice that effectively ended the Korean War, which fell on July 27, Kim said that nuclear weapons would allow North Korea to defend itself "against any high pressure and military threats of imperialists and hostile forces."
North Korea has for years framed its pursuit of nuclear weapons as purely defensive and meant to deter attempts at invasion or regime change. But some experts say nuclear weapons will embolden Pyongyang, allowing the Kim regime to adopt more hostile and bellicose policies while deterring adversaries from responding to lower-level aggression.
Regardless of the reason why North Korea is pursuing nuclear weapons and the ballistic missiles needed to deliver them, Kim's comments Monday are an important reminder of just how difficult it will be to strike a deal that sees Pyongyang give up a program it views as a key to its own survival.
Kim's speech came on one of North Korea's most important holidays: the anniversary of the "Korean people's victory in the great Fatherland Liberation War," which is how North Korea refers to the Korean War.
Most historians agree that the conflict began when Kim Il Sung, the current North Korean leader's grandfather, invaded the South in an attempt to reunify the Korean Peninsula by force. However, North Korea teaches its citizens that the war began when the United States and South Korea marched on the North -- and that Pyongyang won the war thanks to Kim Il Sung's leadership.
The conflict is technically still ongoing, as the fighting parties signed a truce -- not a treaty -- on July 27, 1953, that led to a cessation of hostilities but settled little else. In the decades since, North Korea has warned its people that the threat of invasion remains, even as the conflict faded from national memory in the United States. 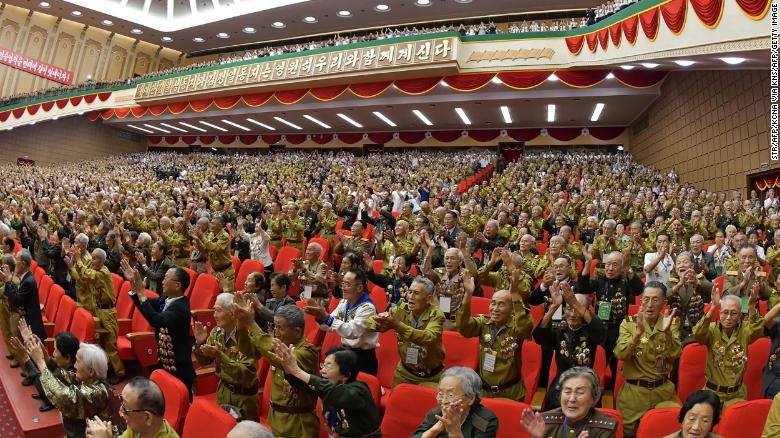 The 6th National Conference of War Veterans is seen in this photograph released by KCNA.
Though some were optimistic that Kim and US President Donald Trump's summit in Singapore in June 2018 could lead to a breakthrough that had long eluded both sides, nuclear talks between Washington and Pyongyang have failed to make any tangible progress.
While the North Koreans have hinted that they're open to another summit between Trump and Kim, the prospects for one appear to be dim.
Kim Yo Jong, the North Korean leader's sister and possibly the second-most powerful figure in the country, said earlier this month that the US would need to adopt a new negotiating strategy if North Korea were to agree to a future meeting between Trump and Kim.
Kim also said she believed that the parameters of negotiations between the two countries needed to change to focus on the "withdrawal of (US) hostility" to North Korea rather than focusing on trading denuclearization for sanctions relief, essentially raising the price for future talks between Washington and Pyongyang.
North Korea has for years accused the United States of employing what it calls a "hostile policy" against the Kim regime, pointing to Washington's alliance with South Korea, its commitment to protect South Korea under the US "nuclear umbrella" and US force deployments in East Asia.
"We would like to make it clear that it does not necessarily mean the denuclearization is not possible," Kim said in a statement published by KCNA. "But what we mean is that it is not possible at this point of time. I remind the US that the denuclearization on the Korean peninsula can be realized only when there are major changes made on the other side."