On Monday, Sagasti was appointed as the new head of Peru's Congress -- a role that puts him in line to assume the country's interim presidency -- after winning 97 lawmakers' votes on Monday. Just 26 legislators voted against him.
The 76-year-old engineer, academic and former World Bank official is now expected to become Peru's fourth president in less than five years -- and the second one in less than a week.
Sagasti's appointment comes as Peruvian authorities struggle to cope with days of violent protests. The instability began on November 9, when Congress impeached former President Martin Vizcarra over corruption allegations. Vizcarra denies any wrongdoing and his impeachment sparked demonstrations across the country. 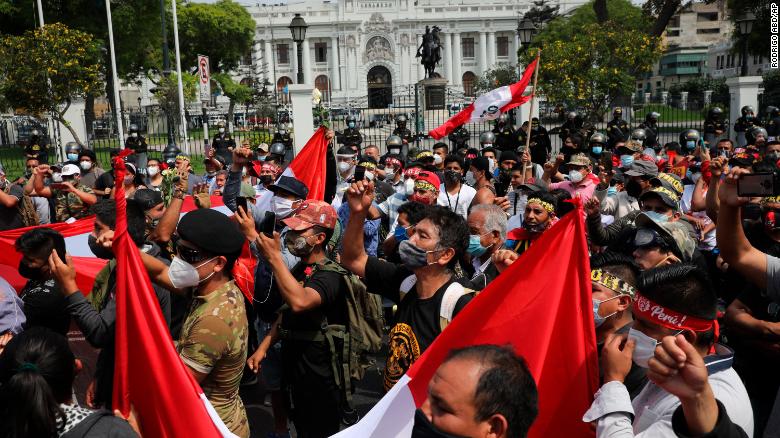 People demonstrate in favor of democracy and against corruption outside Congress in Lima, Peru, on November 16.
Sagasti's party, Partido Morado, was the only group to vote against Vizcarra's removal.
Vizcarra was briefly replaced by interim president Manuel Merino. But activists, opposition parties and civil society groups who saw Vizcarra's ouster as a legislative coup refused to recognize the new leader.
Merino resigned Sunday after only five day in office, following days of protests that left two people dead and more than 90 injured.
"Today is not a day for celebration because we have seen the death of two young people," Sagasti told lawmakers on Monday.
Presidential elections are scheduled for April of next year.