Russians hit the reset button for Putin, but questions of legitimacy linger over his long-term rule

Moscow: On Wednesday, voters across Russia will have a chance to hit the reset button for Vladimir Putin: A national referendum will decide whether to approve a raft of constitutional amendments that will allow the Russian president to run for two more terms in office, potentially extending his tenure until 2036.

At first glance, everything seems to be going to plan for the Kremlin. Back in March, Valentina Tereshkova, a Russian MP from the ruling United Russia party, called in a theatrically staged parliament session for a constitutional amendment that would allow Putin to run for president again after his current term ends in 2024. 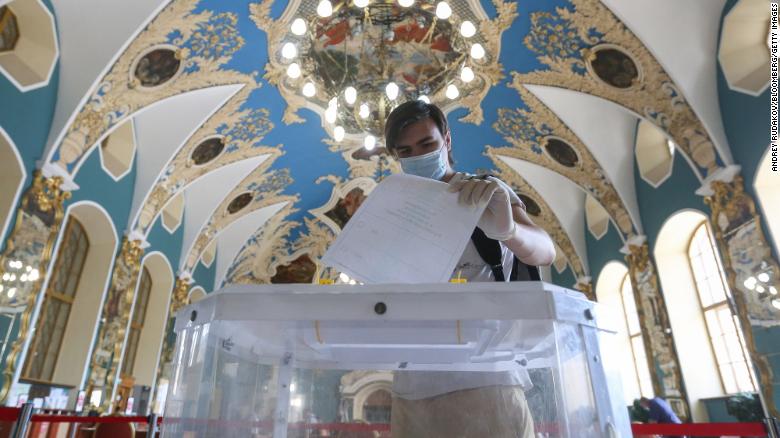 A man casts a ballot at a polling station in Moscow on Tuesday.
It was a move laden with patriotic symbolism: Tereshkova, a former cosmonaut and the first woman to fly in space, is a living connection to the days of Soviet achievement.
Putin appeared in the parliament building just an hour and a half later to endorse the proposal, which then sailed through both houses and the country's constitutional court. But plans for a yes-or-no referendum on the constitutional amendments on April 22 were put on hold amid the coronavirus pandemic, and the rescheduled balloting is now going ahead, backed by a get-out-the-vote blitz.
But more is at stake than just a resetting of term limits. The vote has also become a referendum on the system that has been built around Putin during his two decades in power. As many observers of Russia note, Putin's system of "vertical power" makes him the final arbiter among elites, and their fortunes are, quite literally, tied to him remaining in charge.
Russia in 2020 is not a dictatorship in the classic sense: Putin depends on regular elections as a kind of plebiscite to lend legitimacy to his rule. To be sure, Russia's political system lacks checks and balances: The parliament is packed with loyalists and what Russians call a "pocket" (i.e. powerless) opposition; the president has wide latitude to hire and fire regional leadership; and the courts defer to executive power.
But Putin must follow the letter of the law: After all, he did leave the office to Dmitry Medvedev, staying in power behind the scenes during a four-year interregnum while the new president changed the constitution.
What followed is instructive today: Medvedev introduced a set of constitutional reforms that increased presidential terms to six from four years, and allowed Putin to run again. But widespread allegations of voting fraud that followed 2011 parliamentary elections led to a wave of pro-democracy protests that deeply worried the Kremlin.
Will Wednesday's referendum prompt the same challenge to Putin, or a new wave of street protests? That is difficult to predict, but members of the country's small and embattled opposition have already raised questions about tampering and irregularities in the referendum, which has been opened for early voting since last week, a measure cast by election officials as a coronavirus precaution to allow social distancing. 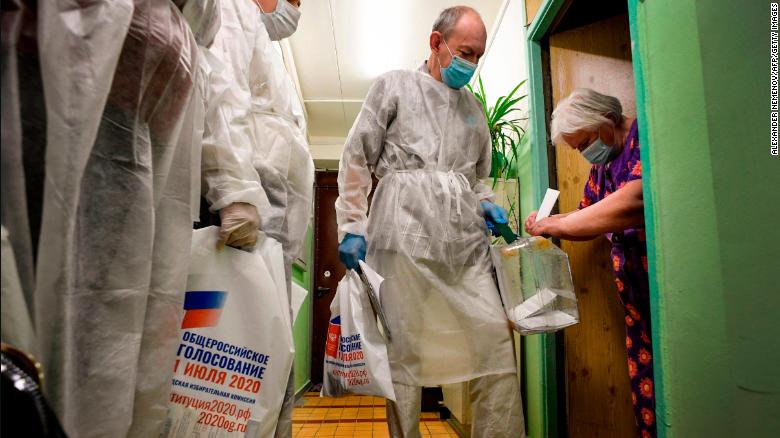 Voting by mobile ballot box in Moscow on Monday.
Some Russians have taken to social media to show their preference, posting NYET (no) on their profiles. Residents of Moscow and other large cities glued anti-Putin stickers next to pro-amendments posters. Others have taken note of a curious fact: Copies of the constitution recently went on sale in bookstores, with the amendments already included, something widely commented on in social media. That suggested to many Russians that the fix was in.
State-run pollster VTsIOM on Monday released early results from exit polling that suggest Putin will win approval for the amendments: According to those results, around 76% of respondents at 800 polling stations around Russia said they supported the constitutional changes.
Putin's popularity has taken a hit during coronavirus, but his approval ratings are still high. And the constitutional amendments include some provisions -- for instance, language that enshrines marriage as being solely between a man and a woman -- that will appeal to a segment of conservative voters.
There is little to suggest the result will not satisfy the Kremlin, but the apparatus of the state has been working overtime to increase the voter turnout to add legitimacy to controversial changes. A massive campaign for the vote launched by authorities on all levels has a range of appeals: TV ads promising great social benefits, billboards showing happy families that voted 'Yes' and brochures with recipes and crosswords plastered on the entrances to residential buildings. But the official ad campaign for the referendum does not highlight that the constitution could solidify Putin's reign until he is 84 and give him immunity from prosecution when he retires.
The same goes for Putin's own messaging. In a short video clip released Tuesday, Putin appears before a new monument to Soviet soldiers and urges Russians to vote for "stability, security, and prosperity," saying a new constitution means a future with good healthcare, education and an "effective government beholden to the public." He makes no mention of the resetting of his term limits. 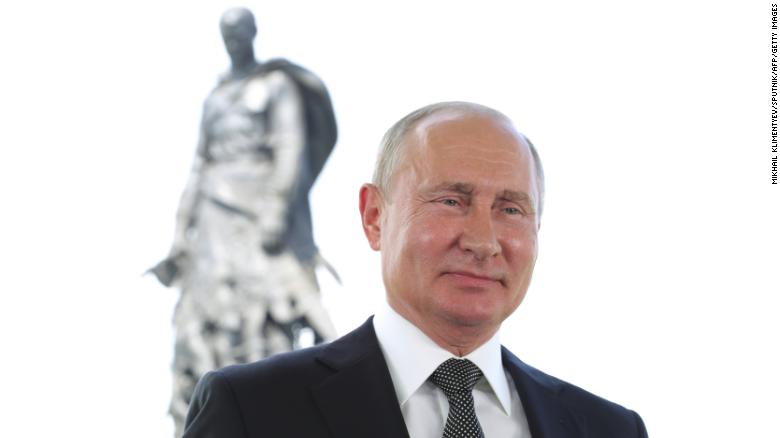 Putin addresses the nation on the eve of the main day of voting.
Independent voting monitors have also raised questions about widespread reports of voting violations. Even before the vote kicked off last week, independent outlets and NGOs posted dozens of screenshots and audio messages suggesting forced voting by employers of big corporations and state-financed organizations.
"In the past few days we have also seen a large numbers of ballot stuffing, so it feels like at some stage it was clear to [the organizers] that the administrative resources to mobilize controlled electorate are running out, they may also be voting in a slightly different way compared to a desired one and they've resorted to good old ways of rigging," Stanislav Andreychuk, co-charman of the non-governmental group Golos, told CNN.
According to Andreychuk, this plebiscite is way less regulated than previous elections his organization monitored: Voting booths set up on park benches violate the secrecy of voting, the usual restrictions on releasing exit polls are not enforced and unregulated campaigning -- aided by raffles promising apartments to lure voters to stations -- muddy the voter's right to freely exercise their will. 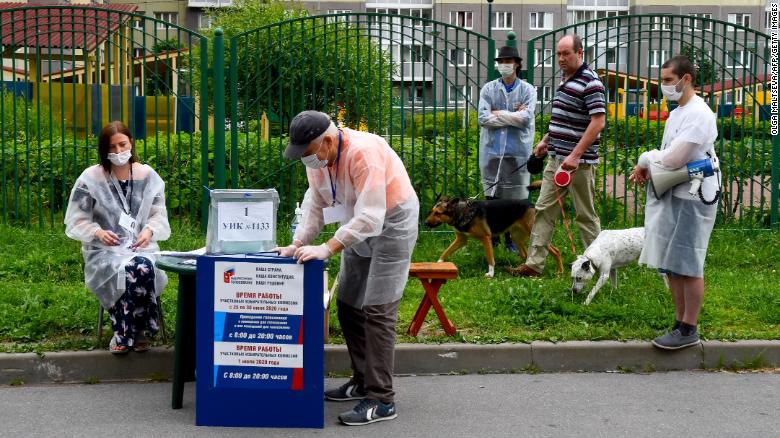 An outdoor polling station in Saint Petersburg.
Asked about anecdotal evidence of voting irregularities, Kremlin spokesperson Dmitry Peskov questioned reports shared on local media about polling stations being set up in the trunks of cars or on park benches.
"The interest in voting is great, but it's too early to draw conclusions, wait, it's just begun," he said in response to questions on a conference call with reporters.
Putin has already signaled strongly that he will run, and that talk of stepping down from office is a needless distraction. In an interview that aired on state television in the run-up to the vote, Putin said he had "not ruled out" running for another term if voters approve the constitutional amendments.
"If this [constitutional change] does not happen, in two years -- I know this from my own experience -- instead of normal, steady work at various levels of power, everyone will start looking around for possible successors," he said. "We need to get on with work, not look for successors."
Still, the referendum has a chance to cast a cloud on Putin's potential re-election -- and theoretically, on his next two terms in office.