A demonstrator dressed as Jesus marches to the Presidential office during a rally against the government on August 15, 2020 in Seoul, South Korea.

A South Korean religious group at the center of a new coronavirus outbreak has been accused by the government of withholding key information and obstructing public health authorities in their fight against the pandemic.

As the scandal develops, many in the country would be forgiven for thinking "we've been here before."
In February, it was the Shincheonji religious group, thousands of whom were infected with the virus in the south eastern city of Daegu, setting the stage for an outbreak that raged throughout the country. The church was accused by officials of refusing to cooperate with the authorities, while members accused both the government and the press of defamation and religious persecution.
Now, history appears to be repeating itself with the Sarang-jeil Church in Seoul. It's the latest clash between a religious group and the government of President Moon Jae-in, who is attempting to stem South Korea's coronavirus outbreak while fighting off accusations he is curbing religious freedom. 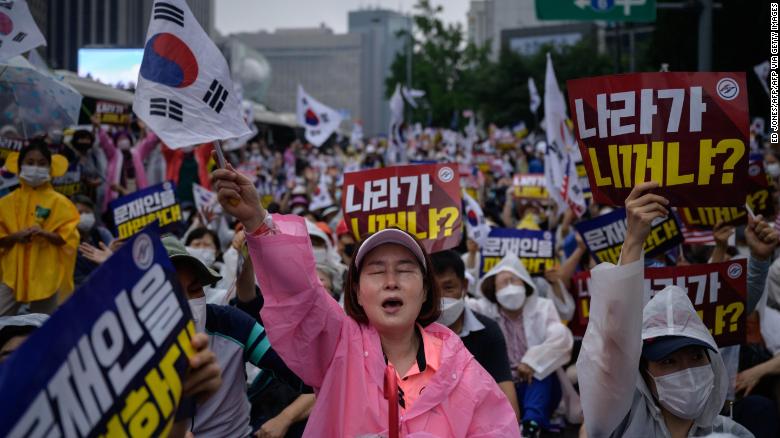 Members of conservative christian groups wave flags and shout slogans during an anti-government rally in the central Gwanghwamun area of Seoul on August 15, 2020.

South Korea reported 288 new cases of the virus on Thursday, the majority of which were in Seoul and the surrounding Gyeonggi province. The outbreak has been linked to the Sarang-jeil Church, which has reported hundreds of positive cases among its members, some 400 of whom have yet to be traced by the authorities.
On Tuesday, Moon's government announced a ban on all religious gatherings in churches in Seoul and the surrounding metropolitan areas, in a move that provoked immediate pushback from conservative religious groups.
Since the latest outbreak began on August 12, more than 1,500 cases have been reported nationwide. South Korean Health Minister Park Neung-hoo has warned the current outbreak could be massive and may cause serious damage if not handled properly.
Police in the capital have been enlisted to help identify and track individuals connected to the church, with the government acutely aware that time is of the essence to contain the spread and enable contact tracing. Health officials are asking all of the congregation who attended services between July 27 and August 13 to be tested and self-quarantine. 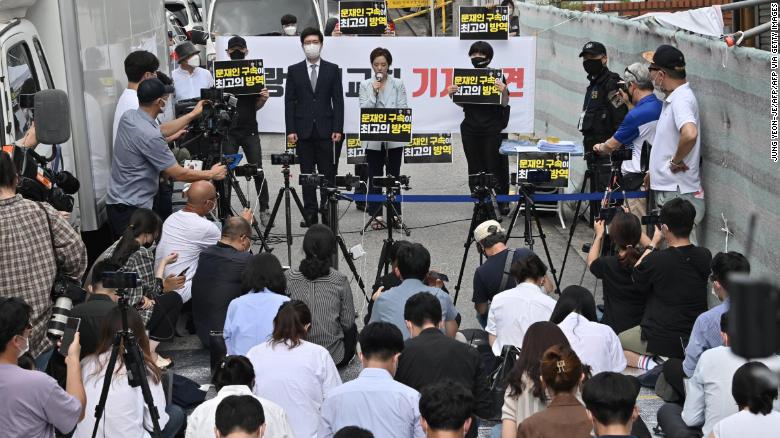 A lawyer of the Sarang-jeil Church holds a press conference in Seoul on August 17, 2020.
Seoul's government said it would seek damages against Sarang-jeil Church and its pastor, Jun Kwang-hoon, for wasting administrative resources and money through their non-compliance. He's already facing criminal charges for allegedly violating quarantine and obstructing contact tracing.
Jun's legal team has rejected claims the church obstructed contact tracing by concealing a list of its members.
Lawyer Kang Yeon-jae told reporters on Monday that "unless the church has a locked gate that only allows people to enter by swiping their ID card ... the church cannot have a perfect list of all the many people who came."
Sarang-jeil has said it will file a criminal complaint against Health Minister Park and acting Seoul Mayor Seo Jeong-hyup for spreading false information and defamation.
And Jun has been defiant in the face of official pressure. On Saturday, he joined a mass anti-government rally in Seoul. Police had discouraged large gatherings, due to fears of infection, but that did not stop thousands of people attending.
Jun gave a speech to the rally, removing his face mask before addressing the crowd.
"This afternoon members of the city hall came to our church, they saw me," he said. "I do not have a fever. I have no symptoms. But they told me to self-quarantine right before this event."
Jun tested positive for the virus on Monday, the Seongbuk District Office said, sparking concerns that the protest could lead to a new cluster of infections. At a press conference that day, his legal team said he had received a quarantine order after returning home from the rally.
While Jun and his church have attracted some sympathy from opponents of President Moon and conservative religious groups, his actions, along with photos of him sitting in the back of an ambulance after testing positive, wearing his mask like a chin strap, have sparked fury from others online.
Speaking Tuesday, Vice Health Minister Kim Ganglip said this week could mark a "critical turning point" in whether the Seoul cluster becomes a nationwide epidemic.
Professor Park Kwang-soo is director of the research center of religions at Wonkwang University, he believes some worshippers may have a lack of understanding of the true dangers of the coronavirus.
"While they believe in God as a loving god, they more so believe in God as a healer," he said. "They generally believe that faith can resolve the issue of disease." 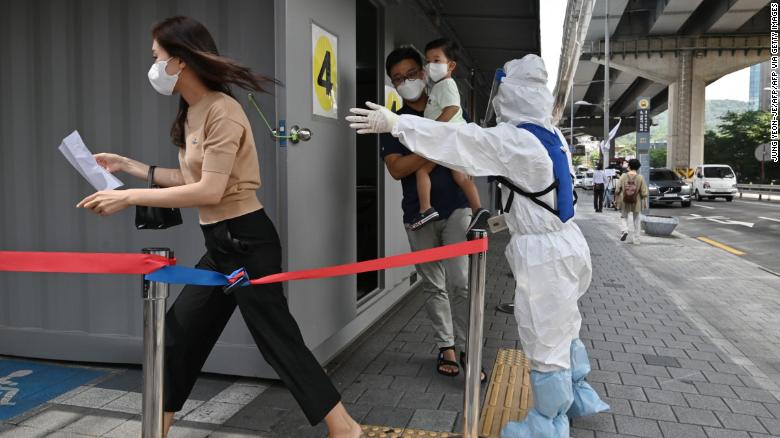 This is not Jun's first brush with the law. Earlier this year, the pastor was arrested for illegal campaigning ahead of the general election, a charge he rejects. He is currently on bail as that trial continues.
Underlying the latest controversy is the widespread suspicion many conservative religious groups have of President Moon, a liberal who has faced growing opposition from the right in recent months.
"There is a tendency among some more conservative churches that the Moon government is against religious freedom," said Professor Tark Ji-il of Busan Presbyterian University, adding that there was "tension and conflict" between many churches and the authorities. 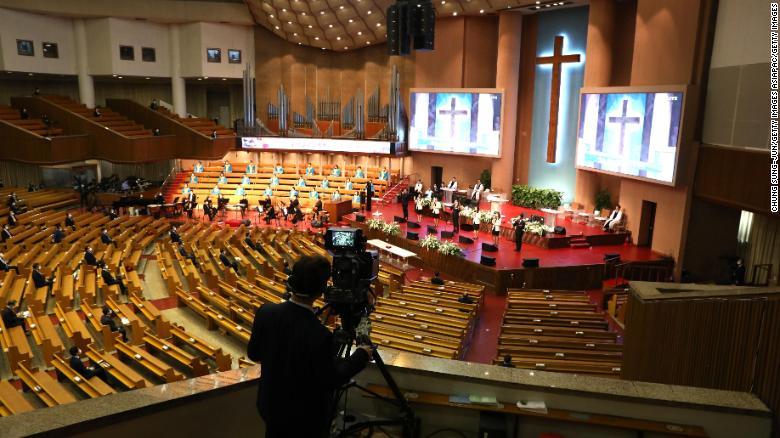 Worshipers take part in a socially distanced Easter service in a church in Seoul in April.
While just 44% of South Koreans identify as religious, according to the South Korean government's 2015 census, some 63% of that figure follow a Christian denomination, and churches are a common sight across the country. Moon is himself a practicing Catholic.
Up to this point, the government has refrained from banning religious gatherings nationwide, instead recommending online services to prevent spread of the virus. Those worshipping in person are required to practice social distancing and wear face masks.
This has not stopped opponents of Moon claiming he is anti-religion, along with accusing him of being a Communist for his engagement with Pyongyang.
At the rally on Saturday, Jun repeated claims that Moon was "handing over South Korea to North Korea" saying Communism has taken over the Blue House, the presidential office. One supporter could be seen carrying a banner which read, "Jailing Moon Jae-in is the best disease prevention."
For his part, Moon described the banned rally targeting him as "a very senseless act that hampers everybody's efforts to contain the spread of the novel coronavirus." He also described it as an unforgivable act that could jeopardize people's lives.